Lately there has been a lot of news about how people just don’t download apps like they used to – how users just use the same couple of apps for most of their time on their phone. Facebook, Instagram, Snapchat, and WhatApp suck all of the oxygen from the room. Pokémon Go, an absolute breakout success, still had the power of a generation of kids grown up, all wanting to be Pokémon Masters in real life (including one of my own kids who’s now doing it for real).

I disagreed with The Business Insider that the app market was in a down slide, and Pokémon Go pretty much is a perfect rebuttal to it. The fastest downloaded app pretty much of all time, and it looks like it’s going to have long legs. But that’s the exception. I want to talk about the disposable apps.

Disposable apps are the apps you need once and then delete off your phone. You might need them again, so you just go back to the app store and download it again. You don’t need to keep it on your phone; you only want it when its needed. I have plenty of those. I think we all do.

My best example of this is our Diners, Drive-Ins and Dives app. It’s all the locations from the TV show, geo-located around the user and with a handy map of the 25 closest around you. Our core user doesn’t need the app every day. In fact, they don’t even use the app every month. They use it when they travel somewhere new. When we first launched, we used to get email updates from users as they drove from the North East to Florida (actually Orlando, so we knew it was a Disney World road trip). They used the app all the way down and back so they could visit the different locations featured on the show for their meals. We’ve had emails from retirees on RV trips across country doing the same thing.

For a fan of the show, you already know all the locations in your home town. It’s when you’re out somewhere new that our app comes in handy. Our challenge is to make sure that when one of our purchasers goes back into the app store to download the app for their current trip, that we still show up and look fresh. Updating our app description to show that we’ve updated the app within the last month lets them know we’re still their go-to app for Diners, Drive-Ins and Dives locations.

There are thousands (hundreds of thousands) of apps that fall into this category. Doesn’t mean they don’t have a market. They just have a market that needs to be reminded of their existence when needed. Currently, iOS isn’t helpful in this regard, but considering how large this market probably is, it should be a feature in iOS (and Android).

Right now, if I already bought/downloaded an app, used it once, and deleted it, it doesn’t always show up as an app when I search my phone for the app name. I still need to open iTunes and either search the app store for it or go into Updated and Purchased and search for my apps there (and as a side note, why on earth are all of my apps sorted by last downloaded? How does that make any normal sense? Shouldn’t it be alphabetical?) Wouldn’t it be nice to have an easy-to-manage set of “ghost apps” or “not downloaded” apps on your phone as a list or in an easy-to find-manner so you can quickly find, open and use, then delete again until the next time you need the app?

Disposable apps might actually be a huge market. I would guess that, out of those hundreds of thousands of apps that never make the top charts, but still have regular usage that doesn’t tie to new downloads, are those apps that users only need sometimes. But aren’t those still important enough to make it easier for users to find them when they need them? Maybe add “Apps not on phone” as a Spotlight search option? Or in an iTunes category, “All My Apps” that can be sorted alphabetically or by category. As stated before, the only sort currently for your apps in iTunes that you’d previously downloaded and deleted is by download order. How helpful is that unless you downloaded something, deleted it, and realized the same day you needed it back?

In a small, very unscientific survey of employees and friends, almost everyone has done this with more than one app in the last year, many of them with multiple apps. And it isn’t just odd little apps that are treated like this. One of our employees does it with Netflix and Hulu, only downloading them when she wants to use them and then deleting them after use. So why doesn’t Apple recognize this and make it easier to find your on demand apps when you want them? 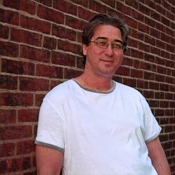 ROSS ROJEK is a database and mobile marketing expert, using apps to revitalize downtowns, organizations, and other groups. Ross has also done several speaking engagements at Main Street conferences throughout the country. He’s also the Chief Technology Officer at GoLocalApps — often the idea factory, pushing their technology so that they can provide the best apps for themselves and their clients. He also knows the key to being a successful app developer in this increasingly competitive market.