Lightning in a Bottle

How we got an iTunes Top 70 app without marketing it

We’ve been developing apps since 2010. We weren’t in the tech business, or programmers, we published print book reviews. We printed on dead trees, reviews of other people’s dead tree writings. It was my full-time gig, and my then girlfriend (now wife) Heidi did the layout and marketing after she was done with her full-time job every day.

At some point, one of us (probably me) said “we should do an app for our childrens’ book reviews so parents can reference them when they’re shopping for new books.” So I went researching systems and about a few months later, found a programmer in Texas with a system that seemed to work. More importantly, he was one of the few that actually emailed me back to answer questions. So Heidi did the design, I figured out the content, and the Kid’s Book Review app was released.

Somehow we were now app developers. We were doing a lot of personal wine tasting in Livermore, and there wasn’t an app. So we made one. Then two clients approached us about making app for their communities. AndGoLocalApps was born.

We did a few more apps for ourselves and clients. And then came our lighting. But we didn’t see it at first.

We had done a family trip to Disneyland. While we were in LA, Heidi wanted to go to one of the locations that had been featured on the TV show Diners, Drive-ins and Dives. She had an app for it, so we found a place that looked good for breakfast, drove there, and discovered it was closed on Sundays. That lead (of course) to a discussion of “we could do a better job than that” as we looked for another place to eat.

And so we set out to make a better app.

We had done plenty of directory apps so far, mostly for wine regions or Main Street communities, so doing a national directory of restaurants shouldn’t be too hard. Turns out it wasn’t easy.

There are a number of places to get listings of the restaurants featured on Diners, Drive-Ins and Dives (DDD for the insiders). But most of them, including the Food Network’s own lists, are pretty inaccurate. So we had to combine multiple sources and then clean the lists. Once we thought we had an accurate list, we hired someone to flesh it out. Adding images for each location, social media links, and What Guy Ate for as many places as we could track down. This is when we realized that most restaurants had horrible websites, with very little information to be had. But once that was done, we were ready to go.

Our app, the Unofficial Guide to Diners, Drive-Ins and Dives,launched in January 2012. And it sold okay. Started out at $200 to $400 a month, and for our first for-sale app, we were pretty happy. There were four other app guides for the show, but we felt that ours was better. None of them were complete and none updated all that often from what we could tell. So we were proud of it and got some really dedicated users off the bat. People who would email us telling they bought the app to use on a road trip and tell us which locations they were going to stop at, and often followed up with a review of the location and the food.

So nothing really special. We probably made our money back after 4 months and spent an hour each week watching the new episode and adding it to the app. We laughed while doing it. Watching TV had become work. So early in June 2012, I discovered some sites doing App Store Optimization (ASO) and started actually looking at the Diners app with new eyes. First thing, the name Unofficial Guide to Diners, Drive-Ins and Dives was too long, and the way iTunes displayed it, potential users only saw “Unofficial Guide to D…” So the sales we were getting were people actually looking at all the results from a search.

In July 2012, we changed the name to Diners, Drive-Ins and Dives: The Unofficial Guide to the Food Network’s Hit TV Show, I did a bit of keyword editing, and rewrote the description of the app. Heidi did some new screenshots with descriptive text, and we resubmitted. Apple approved it a week later and nothing really changed right away. But then it started picking up. We had been doing 20 sales a day during June, then 40 a day in July, with what looked like normal summer sales (people going on road trips and looking for restaurant guides) and then on Sunday July 22, the new version went live. Monday sales broke 100—our best day yet. Then, the following Monday (new episode day back then), sales doubled again to more than 200 a day. Doubled again the following week, and we were ecstatic. But the best was still to come. 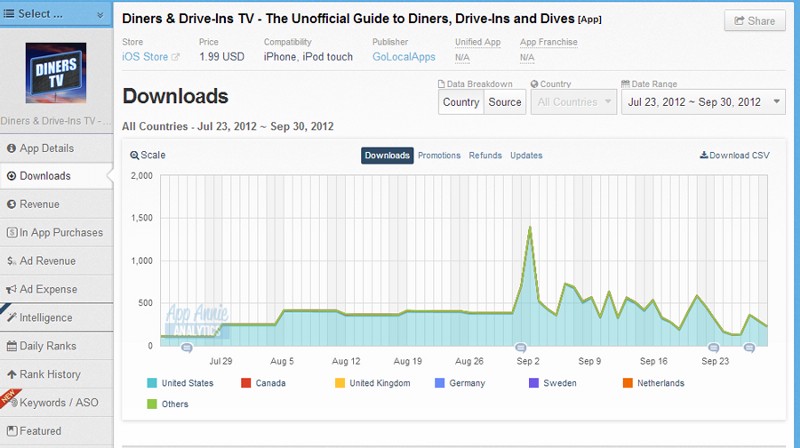 We averaged 400 sales a day through August and then came September. The first new episode of the month kicked us to 1400 sales in one day—a #1 ranking in the Food & Drink category and a U.S. overall rank of 62. We stayed at #1 in Food and Drink for two straight weeks, but sales never got back up into the 1,000s again. But we had lightning in a bottle for almost two months.

Since then, we’ve done several more food TV show apps: Man Versus Food, Cupcake Wars, Best Thing I Ever Ate and Unique Eats. We started doing travel apps (our 50 Things series) and recipe apps (Slow Cookin’ and the forthcoming Bacon Makes Everything Better). But nothing has come close to that period in August/September 2012.